Safety is more important than the mountains! The roof of the Guyu Coal Mine in Yanzhou collapsed, resulting in 4 deaths, 1 injury, and 2 people in full search and rescue.

The roof of a coal mine in Gulin County, Quzhou City collapsed,

The rest of the trapped people are in full search and rescue ...

According to the information office of the People's Government of Gulin County, at 10:37 on October 26, 2019, the roof collapse of the 13619 working face of Shiping No. 1 Coal Mine of Guxu Coal and Electricity Co., Ltd., Sichuan South Coal Industry, caused 7 people to be destroyed. sleepy.

Up to now, 5 trapped persons have been searched and rescued, 4 of them died after being rescued at the scene, 1 person has been sent to hospital for treatment, the vital signs are stable, and 2 people are still in full search and rescue. 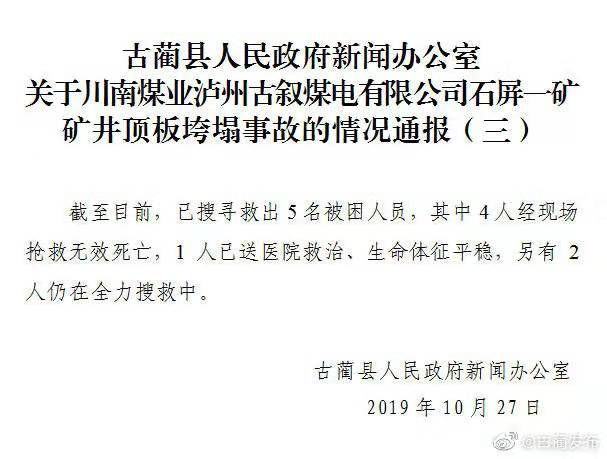 After yesterday's incident, Gulin Fire Fighting, Longshan Mine Rescue Team and surrounding mine rescue teams have rushed to the scene for rescue, and medical staff such as the Affiliated Hospital of Southwest Medical University and Gulin County People's Hospital have now started rescue. According to the staff of Shiping No. 1 Mine, after the accident, Shiping No. 1 Mine immediately stopped. At 13:00 this afternoon, Shiping No. 1 Mine will also organize a group of experienced workers to participate in the rescue.

According to informed sources, the rescued person has been transferred to the Affiliated Hospital of Southwest Medical University to continue treatment. 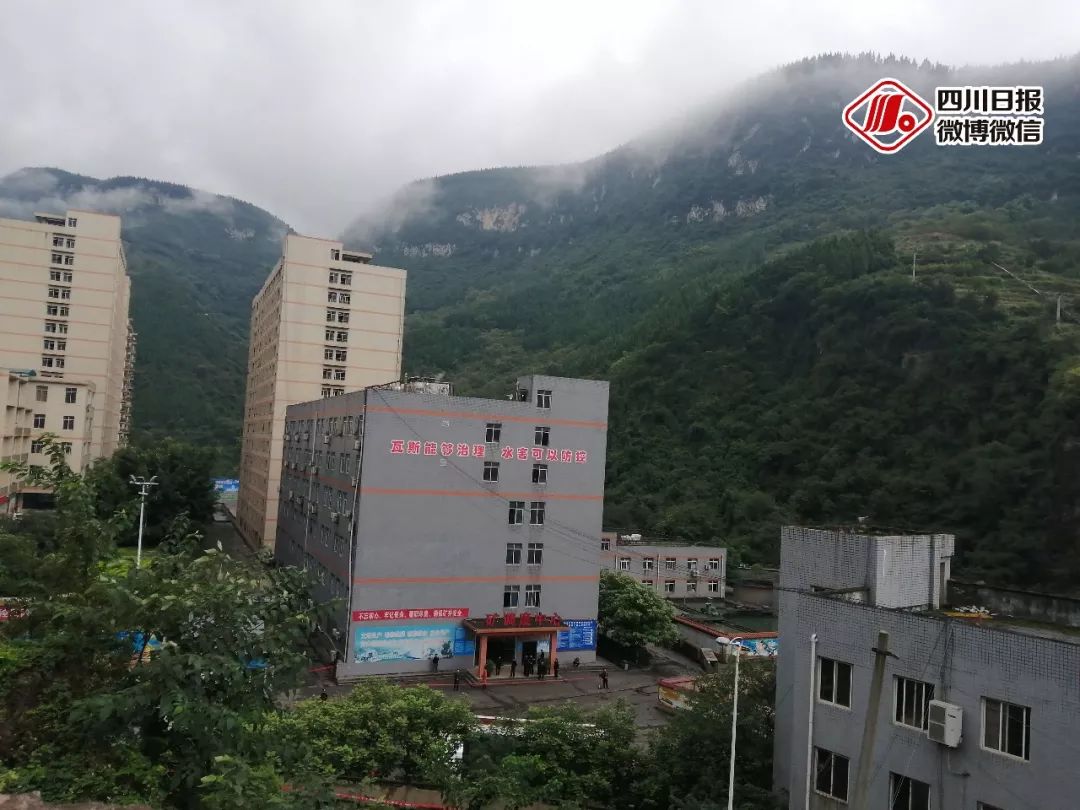 At the door of the Sichuan South Coal Industry Guxu Coal and Electricity Co., Ltd. office, the reporter saw that the red isolation line had been pulled up. Luzhou Observation Photo by Guo Bucku 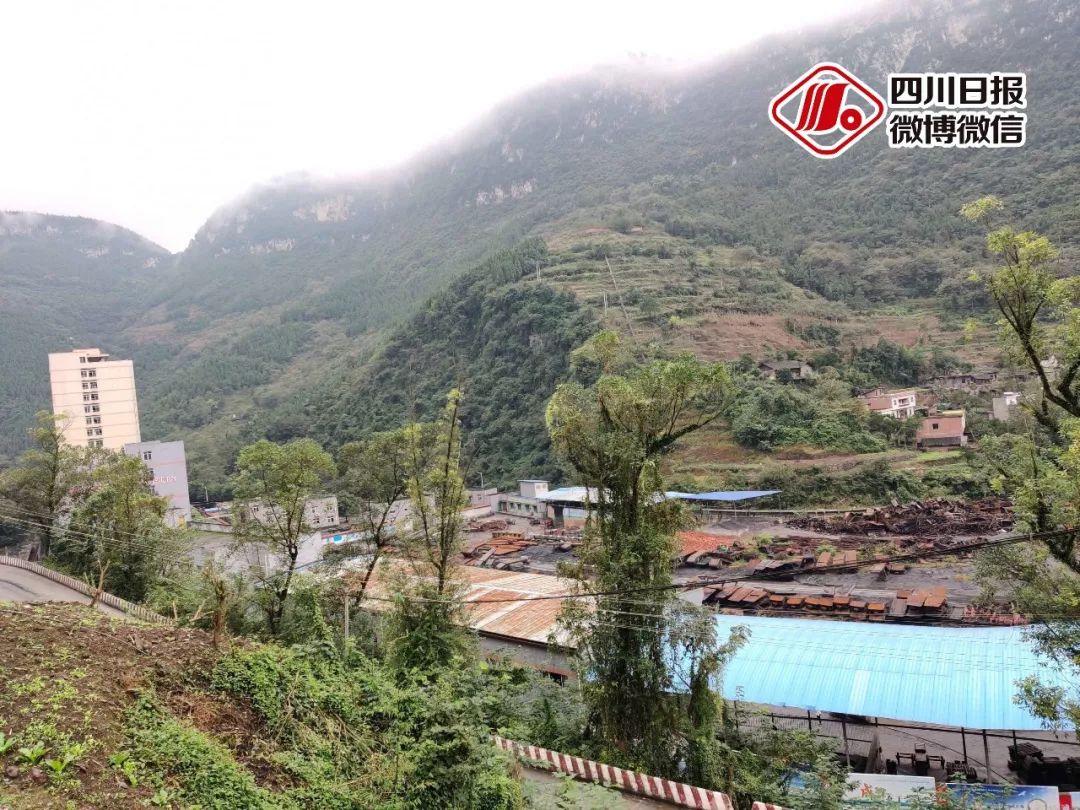 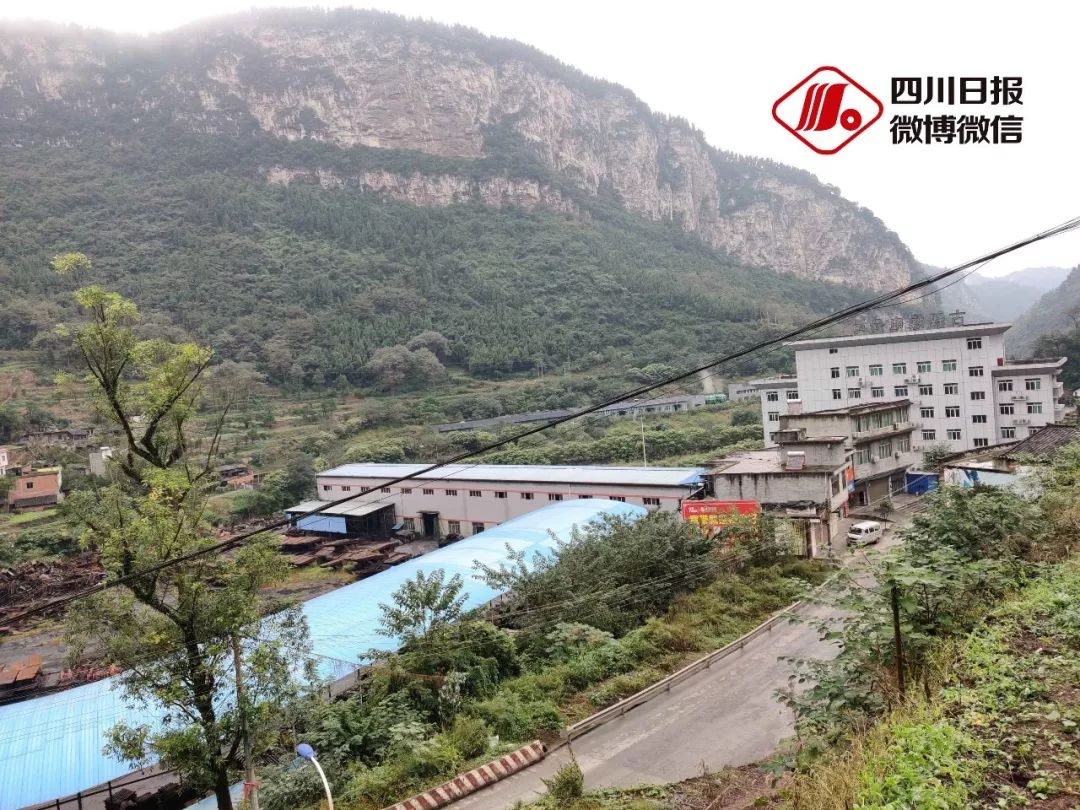 It is reported that,

This is not the first time that the mine has a safety problem,

With multiple reminders about safety,

Why is there such a tragedy?

On September 26, on the eve of the National Day, Li Wanzhong, the secretary of the Guxian County Party Committee, led a team to inspect the safety production work in the Shiping No. 1 Mine, inspected the underground personnel positioning system, gas monitoring system, video monitoring system, and checked the safety production work account. Li Wanzhong emphasized that safe production is the red line, bottom line, and lifeline of coal mining enterprises and cannot be crossed. Li Wanzhong demanded that coal mining enterprises should calculate the "economic account", always put safety production as the first priority, and strictly implement the responsibility of the main body of production safety; county emergency management departments and dependent townships should grasp coal mines with a more responsible, stricter, and more professional attitude Safety, strengthen supervision and inspection, increase inspections, leave no blind spots and no dead ends, and ensure that safety management responsibilities and safety management measures are in place.

Was fined 972,500 yuan for security violations

On August 15 this year, the Sichuan Provincial Emergency Department notified 18 cases: the number of coal mine accidents in the country from January to July was the highest in the country. Among them, the South Sichuan Coal Industry Yanzhou Guxu Coal and Electricity Co., Ltd. Shiping No. 1 Mine did not strictly implement the four-in-one outbreak prevention case.

From July 2nd to 4th, when inspecting the Shiping No. 1 Mine of Chuannan Coal Industry Yanzhou Guxu Coal and Electricity Co., Ltd., it was found that there was no guarantee of the minimum normal distance from the C19 outburst coal seam during the excavation of the 12,824 roofs. Illegal acts greater than 5m will be fined 972,500 yuan for the mine.

In the past six months

Repeatedly learned "how to deal with major disaster technologies"

On May 28, the Shexian Emergency Management Bureau organized a total of 17 coal mine safety supervisors and technical leaders of 6 coal mine companies throughout the county to go to the Shiping No. 1 Mine of Gusu Company to carry out major disaster governance study and study activities, focusing on studying and studying major disasters. Governance technology. On the morning of the 28th, Dai Yingjian, the chief engineer of Shiping No. 1 Coal Mine, explained in detail the prevention and control of major disasters at Shiping No. 1 Mine, and shared experiences on coal mine safety management and disaster prevention work.

On June 21 of the same year, a group of people who knew coal mines in Yanzhou, Neijiang, and Zigong in the southern Sichuan area participated in the "Safe Production Everyone Talks" forum in Chuzhou. Secretary and team leader Xu Kui shared his experience in safety management at the forum, describing that he must be impatient to instill the safety first thought into employees like education "Waer", and improve employees' safety awareness.

More than two years ago

Have not paid electricity bills on schedule

227 downhole operators were in distress,

At 13:30 on March 25, 2017, the Gulian Power Supply Branch abruptly suspended power supply on the grounds that the South Sichuan Coal Industry Yanzhou Guxu Coal and Electricity Co., Ltd. Shiping No. 1 Mine (hereinafter referred to as Shiping No. 1 Mine) failed to pay the electricity bill on schedule, resulting in The dual power sources of the Shiping No. 1 mine lost power at the same time, and several sets of equipment suddenly stopped. The mine's gas exceeded the limit and the maximum gas concentration reached 18.2%, which caused 227 underground operators to be in danger at the time, causing major safety risks.

According to the report, this power outage was the most significant hidden danger of the accident after the “5.11” accident (until March 2017) in Taoxigou Coal Mine, Li County, in 2013. It was found that the power outage was a major potential safety hazard caused by human beings, which was serious in nature and dangerous. Afterwards, the Gujing Power Supply Branch was penalized and the Shiping No. 1 mine was given administrative penalties. The relevant person in charge of the Guzhen Power Supply Branch was given dismissal, demotion, and penalties. Discipline.

Shiping No.1 Mine is located in Shiping Town, Guxian County, Quzhou City, and belongs to Sichuan Guxu Coalfield Development Co., Ltd. It is a state-owned key coal mine. Construction started in December 2007 and was completed and accepted in August 2012. It is a large-scale Guxu mining area. The first pair of large-scale mines developed has a project design and production capacity of 1.2 million tons per year. The mine adopts a zoned ventilation system and develops layouts on the mountain to achieve full mechanized mining.

Sichuan Daily reporter has gone to the scene,

The latest 新橙彩票 will be released as soon as possible.

Previous: The fundamental difference between portable and stationary gas detectors

Next: What are the precautions for heating with natural gas in winter